For some reason, the editor won't let me upload a photo. I so rarely ever write a post without a picture! I'm sure it will look strange.

I worked an eight hour shift at the big box store today, and tomorrow I have a short evening shift. That means that in the morning, Bill and I can both attend the job fair and after that, we're booked for a facial with my sister.

Apparently she's taking an esthetics course and they need people to practice on - I'm all for that! Bill and I went for a massage, a facial and a steam for our first wedding anniversary and loved it, and we're both looking forward to tomorrow.

Speaking of men & facials - do you think that men are finally figuring out how awesome they are? I doubt Bill would have thought so before I dragged him to the first one!
Posted by becomingkate at 8:23 PM 10 comments:

gifts of a different sort 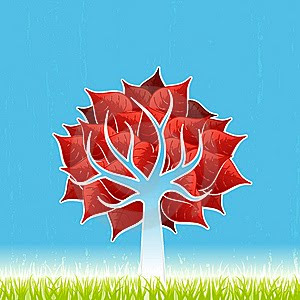 Other than all the flu like sickness in the house (Jamie, myself & Em) and other various snafus, things have been going okay. Ever since Bill lost his job we've been operating on major survival mode, but we've been pretty lucky. Seemingly blessed with good karma some days.

One such incident happened just recently.

We're currently one payment behind on most things, like the phone, the mortgage and the truck. It's scary, but not repossession-scary as long as we keep the status quo and have the last truck and house payments made on the day before the next one is due. Since I have yet to receive any pay from the off price store and Bill's unemployment benefits have just kicked in, we've been piecing income together from everywhere - Jamie's jobs at Home Depot and the bath product store, mine at the clothing store, gutter jobs and kajiji ads.

Last week as the fifteenth approached, my anxiety over the truck payment started to grow as it usually does three to four days before I have to have it. To make things even more complicated, I'm right in the middle of the countdown to Dale's death on October 2, and I found myself thinking about and talking to him as I hand washed my work clothes.


It doesn't seem like seven years at all. Or does it? I wonder if you come around anymore. Do you see us? Have you moved on? I'm getting better every year, but it's taking me awhile. I had no idea of the toll it would take, and I suppose that's good. I try not to have regrets but in this case the price was pretty high.
I wonder if you ever get jealous, if you feel the possessiveness in death like you did in life. I used to chuckle about it because we both know that while you were here I loved you completely, but I also feel a little guilt that my relationship with Bill brings me so much joy. So much so that he feels like a gift, like maybe you had a hand in it. By the way, if you have any connections, can you help us out a little? I don't need a lot, just a little hope.

Within the hour, I got a call from a lady who wanted the microfibre chair that I had listed on Kajiji (for 34 days, 244 hits) for $270, and she didn't even try to talk me down. I made the truck payment that afternoon.
Posted by becomingkate at 7:59 PM 12 comments: 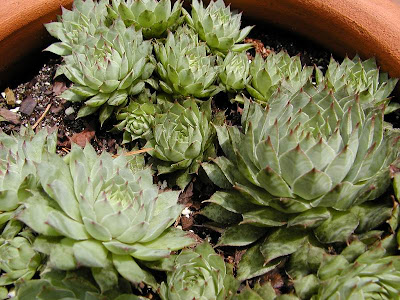 I thought I'd post a picture of my favourite little plant this year, Hens and Chicks. We planted one last year, but it didn't perform well at all and didn't come back.

I'll be the first one to say that I don't know anything at all about gardening! I have a black thumb, usually. What I like about this plant is that it is a perrenial and it can be propagated so easily.

The one we bought this year was bigger, about 5 inches across. It also had a ring of baby hens along the outside, and two weeks after we planted it we removed all the babies and planted them in the soil along the top of the cinder blocks in our rock garden. They've all grown to an impressive size already, but I suspect they won't grow babies until next year.

Another thing I discovered while reading up on them is that they grow in the most precarious conditions - they'll grow on top of a rock! 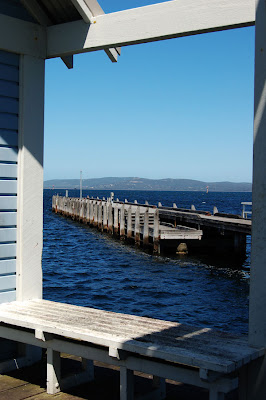 The last few days have been brutal, in that the store I'm working in has shut off their A/C in an attempt to save money. Working an 8 hour shift in that kind of heat makes me bone weary! And very sore. Who knew?

Obviously, I have been very lucky for the last few years, mostly in regard to working conditions - air conditioned office, my own desk, writing my own schedule. I never expected to become a cashier/sales associate again at the age of 44.

I am very thankful that my customers are all very nice, and that I am working with good people. I did have one lady come in that I used to know - way back in the nineties when I was waitressing. She is Greek and her BFF was my boss, and neither of them have much in the way of social graces. Anyway, she asks why I'm working there (aren't you a manager?) I say my husband was laid off, and she says, the last time I saw your husband he was almost dead and I replied, that was my late husband, I'm remarried, to which she says "yeah, he looked terrible."

I'm really looking forward to getting my skills upgraded!
Posted by becomingkate at 7:04 PM 7 comments:

is it Thursday already? 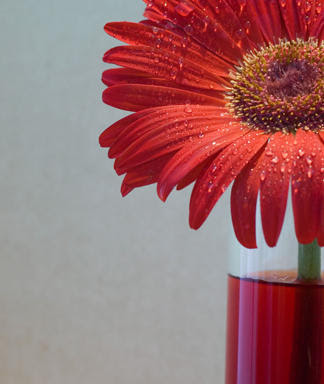 I feel terrible writing all those mean things about Jamie's ex-boyfriend, but for awhile there, he was really bothering me. I think he could have handled everything better, but after awhile, Jamie placed a call to him and asked him to back off. He was a gentleman about it and as far as I know, Jamie wants to try to stay friends. She says he was a terrible boyfriend but would make an awesome friend. Good for her.

I started my new job yesterday but it's not exactly what I'd hoped for. The people are nice but the hours stretch long, and since they've turned down the A/C in an effort to be more green, it's uncomfortably warm for the last four hours of your shift. I might plead with them to turn it up again because there is only so much sweat one can take!

There is more drama going on at the other clothing store since the manager returned from vacation days and heard I took this other position. I do not believe it to be a conflict of interest, but she's using it to chastise her one remaining assistant.

It's a common occurence, unfortunately. She'll come back from days off and start the day at 9 a.m. She'll start looking for mistakes and things not done and start working herself into a state of resentment. By the time poor Becky arrives she's ready to strike. It's sad because not only did Becky get two markdowns finished, she placed the store in the Top #5 in the country and managed to keep the wage cost in line.

I feel for her, but this is one reason I'm not working there full time. I have a shift on Saturday, so I told Becky that if it was a conflict of interest I would forgo that shift. If she's willing to work with me, I'll be there. *sigh*

All this makes me think I should really persue the schooling, but until Bill gets working I'll stick it out. Once he starts getting a regular paycheque I'll be able to focus on upgrading.
Posted by becomingkate at 10:38 AM 5 comments: