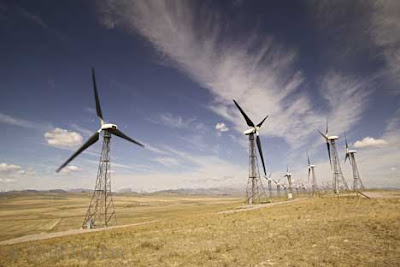 It's a beautiful Sunday today, 10 C°!
Bill is in the front yard fixing the truck (fuel pump) the kids are downstairs cleaning, and I'm trying to figure out what to make for supper on Tuesday night. Bill's sister and BIL are coming for supper and will see our house for the first time!

I love having people over for dinner. It's one of the only times our family will pull together to do a major clean (floors, entranceway, windows, bathrooms - it's a Spring Clean every time!)

Update on Em: She's doing very well and so is Bill; in fact, there is a sense of freedom in the house that we have never had before. Tina's death kind of set off some memories for me (which kind of surprised me) but I went for my yearly physical on Friday and the doc gave me some Xanax to handle the anxiety.

I'll probably pick it up on Monday, not sure if I'll try it at all during the school day but save it for afterward - the last thing I want is to fall asleep while I'm supposed be working on geometry.

I'm off to finish the meatballs. Happy Sunday!
Posted by becomingkate at 4:04 PM 8 comments: 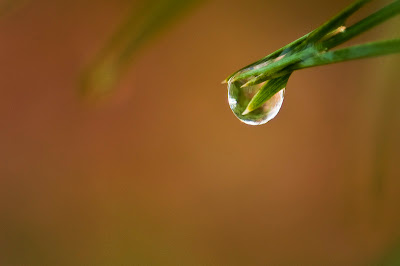 1. What were you doing 10 years ago? I was managing a clothing store and Dale was still alive, Jamie was eleven. We spent a lot of time trying to avoid and/or deal with Dale's alcoholism, so the two of us ate supper at various restaurants while he slept it off.

3. Five things you would do if you were a billionaire: Sell the house and buy an acreage, buy another Xterra, set up a retirement fund for Bill and I, trust funds for the kids and help the family.

4. Three of your habits: avoidance of unpleasant tasks, blogging, leaving half finished drinks around the house.

7. Five things that you did yesterday: made coffee, hand washed some clothes, made the bed, bought meat for supper, took Em to the bookstore.

8. Five people you would want to get to know more about: None that come to mind.

9. Abortion: for or against it? I support a woman's right to choose.

10. Do you think the world would fail with a female Prime Minister? nope.

11. Do you believe in the death penalty? Yes

12. Do you wish marijuana would be legalized already? Perhaps a better word would be "decriminalized."

13. Are you for or against premarital sex? When the time is right it's fine.

14. Do you think same sex marriage should be legalized? I believe in equal rights and responsibilities for everyone.

15. Do you think it's wrong that so many Hispanics are illegally moving to the USA? I don't really have an opinion unless you're talking about Canada.

16. Should the alcohol age be lowered to eighteen? It IS 18 here, and I'm fine with that.

17. Should the war in Iraq be called off? I really feel for everyone involved, but it's not my place to say.

18. Assisted suicide is illegal: do you agree? Not sure if it's illegal here, but unless you've actually watched someone die a terrible death, you'd better not tell me I have no options to help.

19. Do you believe in spanking your children? I spanked Jamie twice when she was two and I was relieved that it worked and I didn't have to do it anymore.

20. Do you worry that others will judge you from reading some of your answers? They might, but I am not worried.
Posted by becomingkate at 2:57 PM 7 comments:

Email ThisBlogThis!Share to TwitterShare to FacebookShare to Pinterest
Labels: meme 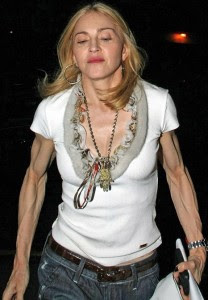 As much as I hate my own upper arms, I would never, ever want to have arms like this. Doesn't it make her look like some kind of alien? Who finds this attractive?
Posted by becomingkate at 8:07 AM 12 comments:

Email ThisBlogThis!Share to TwitterShare to FacebookShare to Pinterest
Labels: celebrities 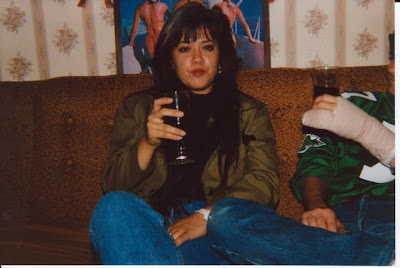 Kathy and part of Dale, the night we met
An old friend recently posted this pic of me from the night that I met my late husband; it was taken on September 29, 1990. So hard to believe it's been twenty years!

Anyway, with Tina's passing last weekend, it seems that Bill and I have even more in common than our love for the kids and similar goals for the future. When I saw this picture of me, my first thought was she has no idea what she's in for. Dale and Tina turned out to be very much alike, except that Tina had a bigger mean streak than Dale did. Both of them died young - Dale was thirty-five and Tina was thirty-eight and they both suffered for years and years.

In the pic I'm twenty-five and single for the first time in almost five years, Jamie would have been about twenty months old then. The night I met Dale I was supposed to meet up with a bunch of friends at a nightclub called Branley's but this guy Shawn called. Now I have mixed feelings for Shawn - I always liked him, but never that way, so when he called to ask me over for a drink I politely declined.

"Sorry," I remember saying, "I gotta take a cab to Branley's and I won't have enough money left if I stop off first." The truth was, I knew he was interested but didn't want to ward off any advances. Still, he kept trying.

"My buddy's here and he'll come to get you."

"Hmmm. Think he'd give me a ride to Branley's afterward?"

Turned out his buddy was Dale. I can picture him now in his Saskatchewan Roughriders football jersey, Levi's and sneakers. From the moment I met him I really liked him, and after we woke up the next morning he drove me home and asked me out on a real date. Shawn tried warning me that he would break my heart and he did, but not for several more years.

I find it ironic that both Dale and Tina suffered from Borderline Personality Disorder. It's characterized by depression, black and white thinking, fear of abandonment, substance abuse, anger issues and suicidal thoughts. Of course, Tina was also bi-polar and had another mental illness called Muncheusen's, but essentially it came down to two things - they were both charming, smart and attractive, but neither had the strength to survive. Dale died twelve years and three days after the picture was taken.

During the next seven years I would be plagued a variety of emotional issues and crippling shoulder pain. Bill survived a mild heart attack but still deals with depression and occasional shoulder and back pain. The kids are still doing well and we pray every day they continue to do so. I know I'll always worry, knowing that Jamie and Em were so badly effected by all the chaos, but they seem stronger for having survived it as well.
Tomorrow, Bill's sister is coming into town and we're all seeing a movie. Since we're too far away to have attended Tina's service, everyone thought a Family Day would be good.

Have a good weekend!
Posted by becomingkate at 6:36 PM 2 comments:

Email ThisBlogThis!Share to TwitterShare to FacebookShare to Pinterest
Labels: about Dale, family, grief 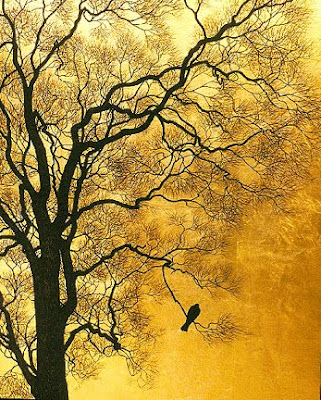 We discovered on Sunday that Emily's bio-mom, Tina, died on Saturday night.

We're not sure of all the details, but it seems that it was suicide and the entire family is devastated.

We had a terribly acromonious relationship with Tina. When she was younger, she was a kind hearted girl with some problems but eventually those problems became all consuming. She'd been abused by her father, who was mentally unstable and cruel, she tended to pick men that were addicts or alcoholics, and she was never the same after her surgery in the year 2000 - that was when her addiction to oxycontin started and it never ended until Saturday night.

In many ways, I am now relieved. For Em, certainly, who rode the rollercoaster along side us for the last few years. I'm relieved that she'll stop threatening to take us back to court, I'm relieved that she'll leave Bill alone (who was the love of her life, based on her actions of the last few years) and I'm relieved for Tina, who must have dealt with much of the same fear and shame as my late husband, Dale. If it was anything at all like that, may she rest in peace.

She was only 38 years old. It doesn't seem real.

I'll be back tomorrow. I'm off to read a few blogs before heading to school.
Posted by becomingkate at 7:09 AM 7 comments: 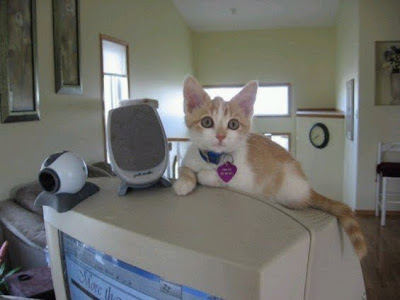 I was going through old photos on Facebook when I came across this picture of Tokyo, our (now) five year old female kitty. Isn't she cute?

When we first got her, she used to sleep on top of the old modem that sat on top of my desk. When I was blogging (which was a LOT - three posts a day!) she was always sleeping beside me. On this particular day, she'd been trying to get up there on her own so I lifted her up and she was happy to stay for awhile.
Posted by becomingkate at 7:00 AM 7 comments:

Email ThisBlogThis!Share to TwitterShare to FacebookShare to Pinterest
Labels: pets 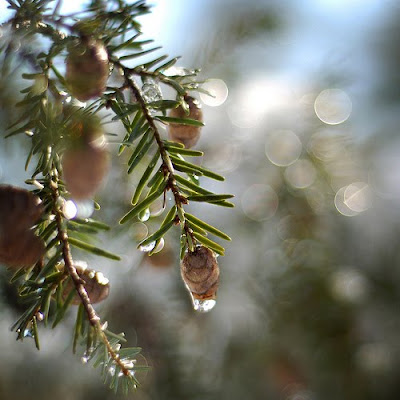 Just a few more weeks and it'll be spring in Alberta. Yay! I can't tell you how happy I'll be once the snow and ice are completely gone. Every morning I bundle up in my wool coat and hiking boots and I can't wait until I can wear my sneakers.

Update on Math 50: Holy crap math is hard! I seemed to do fine on the first module, but the second one (algebra) kicked my butt! I actually failed the unit exam (with something like 34%) and plan to retake it so I'm not overly worried. Okay - I did cry a little knowing that I could have been working and making money rather than failing tests, but I got over that soon enough. Eventually, the school will bring me a business degree and that's what is important.

I think that I've finally come to terms with giving up my truck. I know I said I was okay with it, but to be honest I really, really missed it for the first few months. Part of my issue went back to when I was a single mom in the early nineties. Oh, how I hated taking that bus! I would have walked for an extra fifteen minutes if it meant I didn't have to take a bus, and that attitude followed me into my thirties. In fact, I bet Dale would flip out if he knew I took one every day - back when he was alive I insisted on decent transportation. He had to drive the boogie van because I wouldn't be seen parking next to the other managers at the mall, lol.

Anyway, recently I started thinking about getting a motorbike or a scooter. Wouldn't it be fun in the summer? Also, I think that Bill would be really excited if he knew I'd go for a bike, and I'd be excited knowing that we'd save on insurance! Even before thinking about a bike, Bill and I were talking about getting a half-ton instead of a car, but I think we could afford both if we shopped around.

Off to read some blogs. Happy Wednesday!
Posted by becomingkate at 3:34 PM 6 comments: