it's Boxing Day in Canada 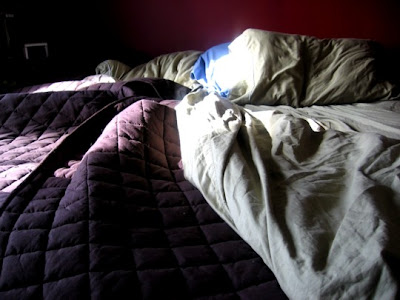 Yesterday turned out very well, in spite of being one of my achey fibro days. The kids let us stay in bed until 09:45, and when we got up Jamie was making pancakes for herself and Em. After the coffee was on, everyone gathered in the living room to open gifts.

The kids got me gardening gloves, magazines, and some garden art, as well as an indoor herb garden. We got Jamie some items for her house, like a stainless steel cannister set and electric skillet, as well as gift cards, costumer jewelry and comfy sweats, for homework nights. The BIG gift had been an iPod Touch, which we gave to her on Wednesday for her 22nd birthday. She was thrilled and seems quite happy with all the apps and subsequent iTunes cards.

Traditionally, Em is harder to shop for; what she wants one day may not be what she wants the following week! But the last year have brought so many changes and this year I think she'll use everything. We focused on fashion & beauty, like the flat iron she's wanted for awhile. Knee high boots with faux fur at the top, a winter hat knitted to look like a cat (ears and whiskers included) and a fuzzy green robe for cold mornings.

Bill and I found it easy to shop for one another this year! He'd recently purchased his first Fender guitar, and I was able to get him a beautiful leather strap and mini-amp, for practicing around the house. He got me a new little Canon! So I'll be able to start posting pics again, yay! He always gets me a biography, and this year it's John Lennon THE LIFE by Philip Norman. I started it last night and it looks like it'll give me some R & R on my time off over the next few days!

Overall, the entire season went well and now that I've had a day of rest I'm feeling much better. Today we're cleaning the kitchen and figuring out what to do with the huge amount of leftover chicken we have in the fridge! We cooked the last of the Hutterite chickens last night (those chickens average 9lbs each!) but weren't hungry enough to have more than a little plate.

Happy Boxing Day!
Posted by becomingkate at 11:01 AM 6 comments:

Email ThisBlogThis!Share to TwitterShare to FacebookShare to Pinterest
Labels: Christmas 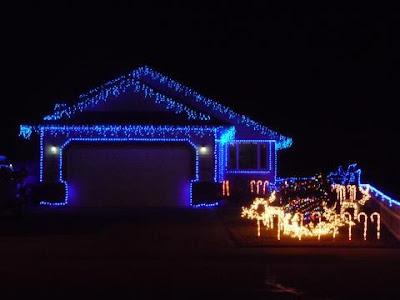 We haven't decorated the exterior of our house. Last year we didn't because we didn't want to spend the money, this year we were just too tired.

It always makes me chuckle when I think back to the day I turned 30 (almost sixteen years ago now.) My friend Crystal and I were sitting in a club, waiting for the rest of the group to show up. I was wearing a black blazer with corset lacing up the side, a knee length pencil skirt and a pair of knee high, leather laced up boots. I had a cigarette in one hand and a double rye & coke in the other.

"That's because you're twenty-one," I said with a smirk. "At least I am young at heart."

"That's true," she agreed. "You'll have to come out for MY thirieth. You'll be forty by then!"

I took a long sip of the whiskey. "Where do they go, do you think?"

"The forty year olds - to party. Why isn't there clubs for people over forty?"

I know the answer to this one now that I'm forty-five. We don't have time, and if we did, we'd be having a nap. 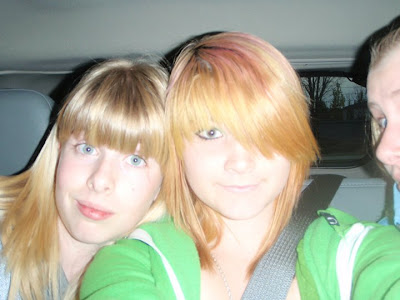 The countdown is on now that there's only a few days left until Jamie's birthday. She'll be twenty-two!! For those of you from journalspace, you may remember that she was sixteen when I first started blogging. Now, she's living on her own in a rental house over by the college; she's working part time at an accessories store and taking several classes, which should be finished by now. She recenty got word that her student loan was approved and that will really make a huge difference! Last semester she and I paid for all her classes with cash so she had to be careful how much she was spending and when her classes were taking place so that they wouldn't interfere with work. Now, she'll be scheduling her work around her classes.

Bill and I are particularly proud of the way that Jamie bounces back from problems in her life, without the use of drugs, alcohol or sex. Not all of her friends and colleagues can say that, unfortunately. Even Bill and I can't say that!

Last winter, directly after the holidays, she broke up with her BF of a year because he just didn't care enough. She wanted someone who wanted to see her every day; wanted to come over for dinner or to just to hang out. She wanted a man who didn't have mommy issues and who wanted to help lift the burdens of every day life and he wasn't it. In the past I may have worried that she'd have low self-esteem and hook up with an abusive guy but I shouldn't have. She won't lower herself for anyone and I love that.

Bill and I are doing well at work, but we have a new area manager and he's been a challenge. He's some kind of wonderboy sent to us from Dubai (through our head offices in Paris) and appointed by the President of the company himself. The first day I met him he questioned my company vehicle (my status does not indicate the need for a vehicle as nice as this) and warned me that the January 15th end date of my contract was "looming."

"Yes," he replied in a posh, french-and-something-else-accent. "You will have to prove yourself to me."

Still, things have been improving and I hope that Wonderboy offers me a permanent contract in January. If he doesn't, both Bill and I will be looking for work elsewhere.

Speaking of work, Em is doing an eight hour shift around the house today. On Friday I gave her $80 to do some Christmas shopping and she lost it at the mall (this is the third time out of five Christmasses she's been here) and she's working from 11-7 so that she understands what an eight hour shift is like. She'll get a half hour break at 3 pm, but otherwise she's working right through as though she was actually at a real job. Obviously, we feel she doesn't appreciate what a full work day is like and we want her to experience that. After the first hour, she started watching the clock, lol.

the raven and the crow 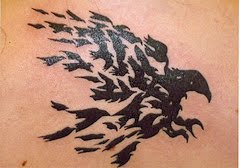 one of several tattooes that Bill is looking at

Throughout that long fall season and once again through the winter, the widow suffered withdrawal of her dead husband. She suffered even though she'd taken up with someone new (as an afterthought, she wondered if he might be too young, but in the end thought him to be mentally ill and couldn't deal with another psychotic) and so let him go. Not that that was easy, since he seemed to be hanging on with all his might; he may not have wanted her for anything more than security and a free ride to work but that was quite a lot in his eyes!

After the dust settled, the widow set about doing two things in tandem; finding out who she really was, as she'd been adopted, and finding another partner (a better partner) so that she'd feel complete(even though everyone told her that was silly, she could be complete on her own.)

Discovering herself was easy, as every day that passed taught her that she was much stronger than originally surmised. She found that each day as she got up and got dressed and went about her business, she was learning. First, that the world in general viewed her as someone different than she was before. Somehow less than before. Also, she learned that a huge percentage of her socio-economic group did not know how to deal with the illness or death, and for that she was somewhat ostrasized.

This gave the widow an opportunity to look a little closer in the mirror, and during the next few months she discovered that her anscestors were from Haida Gwaii, and she was born from a very long, very old branch of the aboriginal peoples of Northern British Columbia, the Tshimshian. More research seemed to say she was from the Raven Clan, and she was not surprised to learn that the women were often shamans and soul doctors.

During this time, the widow continued to suffer the seperation from her (now) long dead husband. She had received a few visits from him during the first year, once at ten months and then again two months later (to proclaim his lasting love and to gift her with the northern lights, Aurora Borealis) but nothing since. Yet she continued to feel a strong connection, a presence, a yearning, and one day when she could stand it no more she cried out. "Please!" she begged of him, tears dampening her cheeks. "Please, let me go; I don't have the strength... Please, if you love me, let me go." She cried until she was dry, and continued on home.

Weeks passed and turned into months and the widow felt a subtle shifting in her day to day life and her ability to sleep at night. She still felt her dead husband from time to time but it was almost peripheral and nothing solid. She noticed that the love she carried for him was changing into something softer, more maternal.

Spring came and with the melting of the snow came renewed hope. The widow, who had never considered herself different, began to embrace the idea that different might be good.

And the following month, she met the man whose grandmother considered herself a healer in life and a crow in death. A medicine man in his own right, he had eyes that changed from gray to green and a way with touch that healed animals and calmed the emotions of the people he loved.

Each had followed a parallel path that led to the other, and to this day they travel along together; the raven and the crow on a journey with no destination in mind.
Posted by becomingkate at 11:51 AM 3 comments: 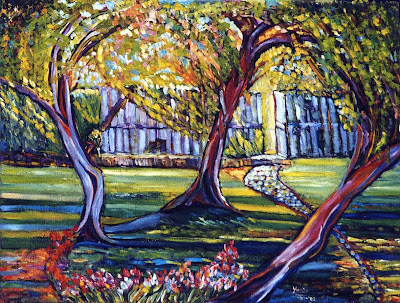 I'm not sure where I found the painting, so I apologize in advance for not knowing the artist. It's so pretty, I must have used it as a wallpaper at one time or another.

Anyway, things have been going very well these last few days. I got hooked on a Showtime show called The United States of Tara. I watched both seasons online and can't wait until the show returns in 2011. I love the quirky, intense characters and unusal storylines.

My parents gifted us with a 1/4 of beef!
For those who may not know, that is 250 lbs of ground beef, roasts, ribs, steaks (including the tenderloin) and stew meat. It almost completely filled our 7 cubic foot freezer. What an awesome gift, I just couldn't thank them enough.

Rogue is adapting well. She's eight weeks old but still only two pounds! She's been treated for all the fleas and other nasty disorders (including an eye problem and intestinal problem) and totally accepts us as her clan, poor kitty.
Posted by becomingkate at 7:18 PM 5 comments: